Difference between revisions of "Foobar2000:Preferences:Networking"

Settings on this page affect how foobar2000 processes streaming audio. 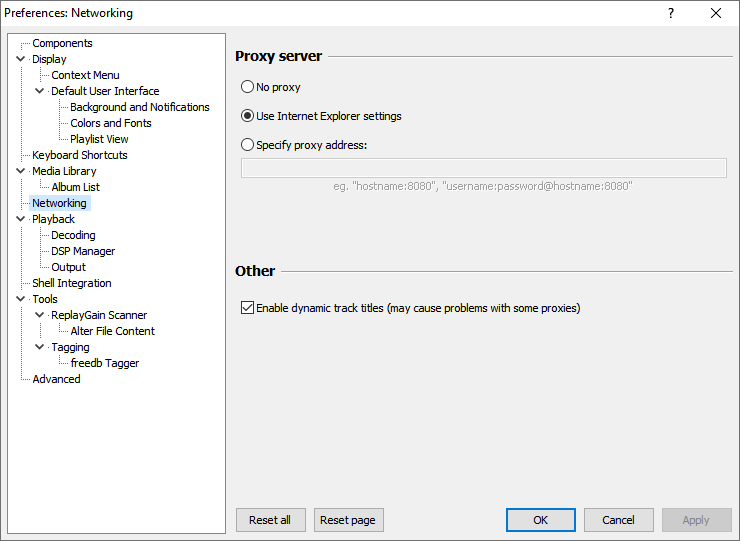 Buffer size is how much data to read from the stream before starting playback. Even if a server is pumping out a stream continuously and at a constant rate, normal network lag between the server and your computer can cause the rate at which data reaches you to vary. Sometimes you will get too much data, sometimes not enough. A buffer can help insulate the player from these variations, thus preventing interruptions in playback. Too small of a buffer increases the risk of lost data and choppy sound.

The default setting of 256 KB should be more than enough for average network conditions. If you get choppy sound from a stream, increasing the buffer size can help. However it won't make up for a disparity between the stream's bitrate and your network connection's bandwidth.

This is for standard HTTP proxying, not SOCKS or HTTP CONNECT-based proxying.

If checked, in its initial connection to a SHOUTcast server, foobar2000 will send an Icy-Metadata: 1 to inform the server it wants to receive metadata (song artist & title, normally) multiplexed in the stream, and it will parse that metadata as it comes in and use it to dynamically update %artist% and %title% playlist fields.

If unchecked, the %title% will contain the stream/station name or URL only; no metadata will be requested or parsed.