I wanted to test EAC’s secure mode, old secure mode (Paranoid), CDex’s Paranoia implementation at recovering errors to do this with accurate results I first needed to find a drive which 1. Does not jitter & 2. Does not cache (or buffer) audio data because these things make accurate error recovery more complicated & currently CDex does not support drives which cache audio & jitter. My Pioneer 106s was my most suited drive so chose it for the test. Second I needed to find a CD with a track that had unrecoverable errors I chose a pressed CD with light & heavy scratches that I had lying around.. I would later need to clean the CD to create a reference copy of the track.

The software & setting I used were,

Track was ripped with each program, I then cleaned the CD & extracted the track with my Lite-on 811s using EAC secure mode & test & copy (achieved a CRC match) which I used as a reference file. I then bit compared each track from each extraction program against the reference file using foobar.

EAC was best at recovering errors, CDex was at a close second & EAC's old secure mode (Paranoid) was worst. 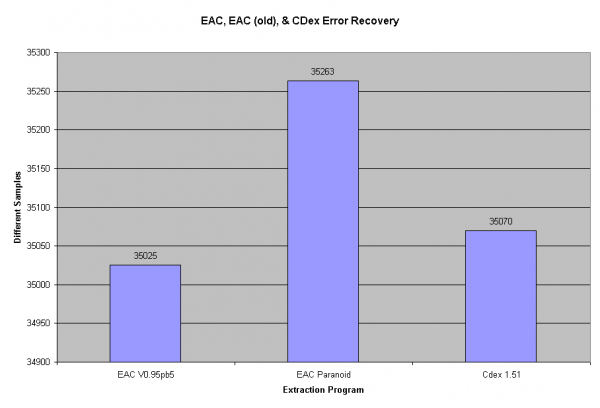 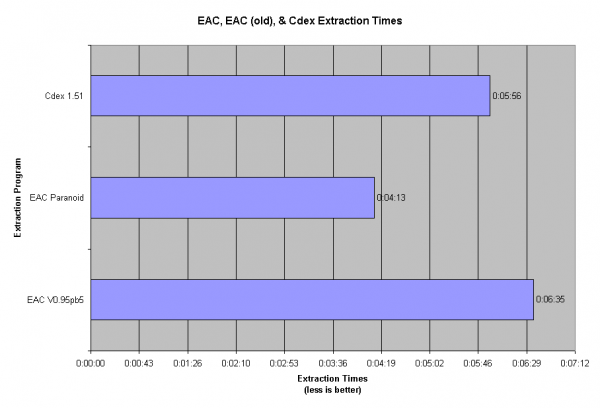 EAC’s secure mode had the least amount of errors making it best at recovering errors but difference wasn't large between EAC's secure mode & CDex Paranoia, Full. I believe the differences in scores are due to the amount of read-retries the program commands the drive to take.

CDex's Paranoia, Full did very well & the test has shown that when using a supported drive (a drive that doesn't cache audio or jitter) CDex does in fact report not corrected errors & is a good compromise between speed/quality for recovering errors.

EAC's old secure mode (Paranoid) was the fastest & may be helpful for highly damaged CD's because of it's speed but should be avoided if you want accuracy.