Difference between revisions of "Xing"

The Xing (pronounced "zing") MP3 encoder has, for a long time, held the crown of being one of the fastest MP3 encoders. Of course that comes with a price, and quality isn't on par with other - slower, but tuned for quality instead of speed - encoders like FhG Slowenc (Audioactive) and LAME.

While Xing has always been considered an encoder with terrible quality, that rumour was proven untrue after a listening test compared an old version of it against other MP3 encoders and it ended up not even close to last place.

Recently, Real Networks - owners of the Xing assets after they bought that company - decided to release the Xing encoder under an open source license. https://helixcommunity.org/viewcvs/cgi/viewcvs.cgi/datatype/mp3/codec/encoder/ 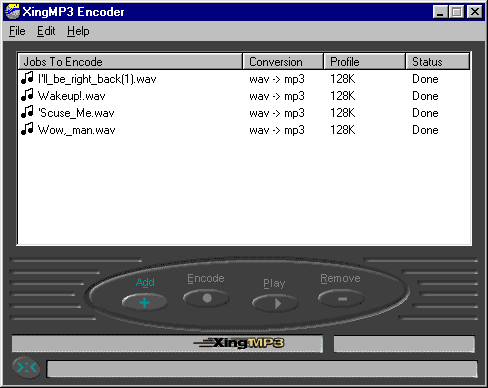