lossyWAV is based on the lossyFLAC idea proposed by David Robinson at Hydrogenaudio, which is a method of carefully reducing the bitdepth of samples, therefore utilising the wasted bits feature of the FLAC lossless codec. The aim is to transparently reduce audio bit depth (by making some lower significant bits (LSB's) zero), consequently taking advantage of FLAC's detection of consistently-zeroed lower significant bits within each single frame and significantly increasing coding efficiency.[1] In this way the user can enjoy audio encoded using the same codec (which may be all important from a hardware compatibility perspective) at a reduced bitrate compared to the lossless version.

Nick Currie ported the original MATLAB implementation to Delphi (Many thanks CodeGear for Turbo Explorer!!) with a liberal sprinkling of IA-32 and x87 Assembly Language for speed.

Since then, Nick has heavily developed and built upon lossyWAV, with valuable tuning performed by Horst Alb at Hydrogenaudio. Although the current lossyWAV implementation has built on David's original method, the method itself still very much belongs to its author.

The --correction parameter is used when processing to create a correction file which is named with the .lwcdf.wav double filename extension. When "added" to the corresponding .lossy.wav, using the --merge parameter, the original file will be reconstituted.

lossyWAV inserts a variable-length 'fact' chunk into the WAV file immediately after the 'fmt ' chunk. This takes the form:Where the version, date & time and user settings are copied. Additionally, if a lossyWAV 'fact' chunk is found in a file, the processing will be halted (exit code = 16) to prevent re-processing of an already processed file. 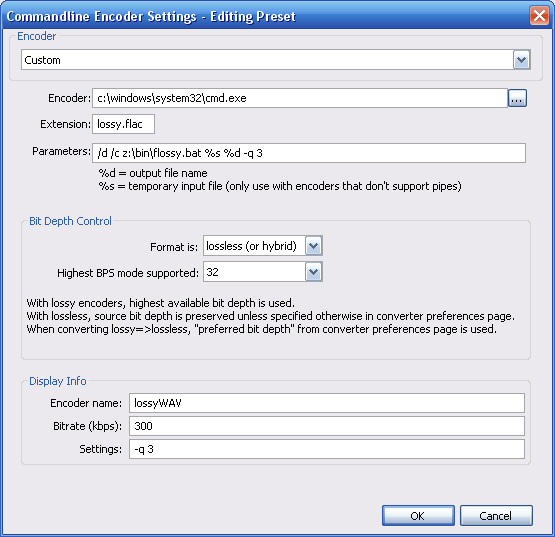