Difference between revisions of "LAME"

Some benefits for using LAME:

These settings require LAME 3.94 or later. LAME 3.97beta3 is the recommended version.

Avoid using alpha (a) versions of LAME. More often than not those are exclusively for testing purposes. Use them only if you want to help developers with feedback.

Note #1: the rule of thumb when considering encoding options: at a given bitrate, VBR is higher quality than ABR, which is higher quality than CBR (VBR > ABR > CBR in terms of quality). The exception to this is when you choose the highest possible CBR bitrate, which is 320 kbps (-b 320 = --alt-preset insane), but this produces very large filesizes for very little audible benefit.

Note #2: all modes and settings mentioned in this topic belong to the specifications of the MP3 standard, and the resulting MP3s should be playable by every MP3 decoder that conforms with the standard. If your decoder or device does not play MP3s produced by LAME, blame the manufacturer or developer, and not LAME. 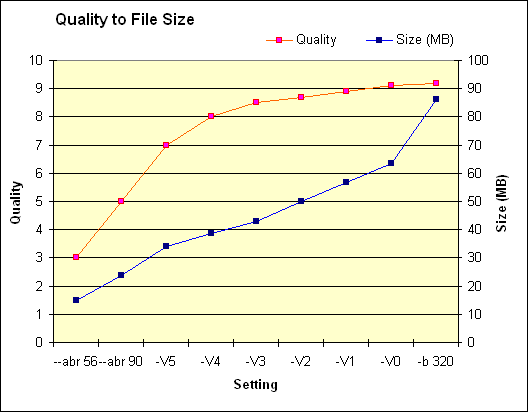 A big thanks to all LAME developers for making one kickass MP3 codec.