Difference between revisions of "ID3v1"

The audio format MPEG layer I, layer II and layer III (MP3) has no native way of saving information about the contents, except for some simple yes/no parameters like "private", "copyrighted" and "original home" (meaning this is the original file and not a copy). A solution to this problem was introduced with the program "Studio3" by Eric Kemp alias NamkraD in 1996. By adding a small chunk of extra data in the end of the file one could get the MP3 file to carry information about the audio and not just the audio itself.

The placement of the tag, as the data was called, was probably chosen as there were little chance that it should disturb decoders. In order to make it easy to detect a fixed size of 128 bytes was chosen. The tag has the following layout: 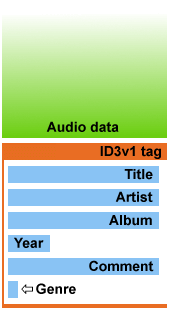 If you one sum the the size of all these fields we see that 30+30+30+4+30+1 equals 125 bytes and not 128 bytes. The missing three bytes can be found at the very beginning of the tag, before the song title. These three bytes are always "TAG" and is the identification that this is indeed a ID3 tag. The easiest way to find a ID3v1/1.1 tag is to look for the word "TAG" 128 bytes from the end of a file.

As all artists doesn't have a 30 character name it is said that if there is some bytes left after the information is entered in the field, those bytes should be fille with the binary value 0. You might also think that you cannot write that much in the genre field, being one byte big, but it is more clever than that. The byte value you enter in the genre field corresponds to a value in a predefined list. The list that Eric Kemp created had 80 entries, ranging from 0 to 79.

This material is copyrighted by | Martin Nilsson, taken from | ID3 made easy .