Decoding the extra information required an HDCD-compatible player or Windows Media Player. There was no public documentation for the process, but it was eventually reverse engineered. Many HDCD-encoded CDs were released from the mid 1990s but started to disappear around 2008. Some CD's with HDCD codes are still appearing, because they were mastered using HDCD equipment, but do not use the core features of HDCD. Microsoft no longer advertises nor supports HDCD.

A lossless copy of CD audio will include the HDCD data. See List of HDCD-encoded Compact Discs, or the more complete, but less detailed list of known HDCD compact discs at Head-Fi.org

Peak extend (PE)
The base 6dB amplification makes the lower levels louder, but the top 9dB is soft-limited, or "squashed", into the top 3dB in the 16-bit stream. When HDCD is being decoded, the top 9dB is reconstructed.
Low-level gain adjustment (LLE)
The base 6dB amplification can be corrected down during quieter parts via HDCD control codes to restore the original low level. See §Regarding the Low-level Gain Adjustment feature.
Filters
There were to be two selectable playback filters, but the idea was already patented and so it couldn't be used in Pacific Microsonics or other licensed hardware decoders. Software decoders can detect the feature, but none use it.

When playing the HDCD-CD in a regular CD player, a listener may hear the uncorrected distortion at the peaks, and the low-level remains uncorrected from the base 6dB amplification.

As HDCD is a proprietary extension owned by Microsoft, Windows Media Player was the only software to support it for a long time. A simple closed-source Windows-only decoding tool, called hdcd.exe, appeared in 2007 on the Doom9 Forum, a product of reverse-engineering Windows Media Player. [1] Since that time, an open source implementation has come to exist based on this work. It supports the peak extend and gain HDCD features, while the transient filter feature is detected but not implemented.

All of the open source decoding is based of the work of Christopher J. Key (original reverse-engineering), Chris Moeller (open implementation), and Gumboot (C-optimization). Benjamin Steffes simplified the code, by using some pre-computed tables, etc., for inclusion in FFmpeg. There may be slight variations in the output of the different tools.

The original Windows-only closed source tool posted on the Doom9 forums in 2007, by C.J. Key. It only works on wav.

An open-source HDCD decoder library exists as libhdcd. It is based on the foo_hdcd and ffmpeg/af_hdcd work by Christopher Key, Chris Moeller (kode54), Gumboot, Burt P. and others.

It comes with a detection/decoder tool:

If an output file is not specified, only HDCD detection information is printed.

FFmpeg version 3.1's libavfilter supports a HDCD filter that will convert HDCD-encoded audio to PCM at up to 20-bit precision. The filter is based on the Foobar2000 component source code.

Notice: There was a bug in FFmpeg (version 3.1.1 and earlier) that prevented low-level gain adjustment from working. It was fixed in this commit.

Example 2
Notice the output from the filter is truncated down to 16-bit because the wav muxer defaults to pcm_s16le...

Example 3
... if you want to use another format (like pcm_s24le), you have to specify it with the acodec option

If using the FFmpeg to convert HDCD-encoded lossless to AAC, it is important to note that the Fraunhofer FDK AAC (libfdk-aac) encoder only allows 16-bit PCM input, so FFmpeg will convert the 32-bit PCM output of the filter back to 16-bit before encoding AAC. The FFmpeg 3.0+ AAC encoder uses floating-point input, so the 32-bit PCM output of the filter will be converted to floating point PCM before encoding AAC. In this case, the native AAC encoder is preferable to FDK AAC, but only if using CBR, and at a high enough bitrate to overcome the other deficiencies of the libavcodec AAC encoder. 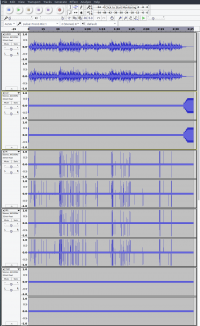 FFmpeg's HDCD filter has a mode, selected by filter option, to aid in analysis of HDCD encoded audio. In this mode the audio is replaced by a solid tone and the amplitude is adjusted to signal some specified aspect of the process. The output file can be loaded in an audio editor alongside the original, where the user can see where different features or states are present.

An example track, Neil Young - Red Sun, from Silver & Gold. The different outputs loaded together in Audacity shown to the right are explained below.

HDCD stats reporting was added after release 3.1.1. So, as of 30 July 2016, this script requires building ffmpeg from git. (git clone git://source.ffmpeg.org/ffmpeg) or using something like a Zeranoe FFmpeg build for Windows.

HDCD was (mostly) a scam

For casual readers, here is what you need to know about the existence of HDCD.

The arrival of a valid packet for a channel resets a code detect timer for that channel. If both channels have active timers, then code is deemed to be present and the filter select data is considered valid immediately. However, any command data which would effect the level of the signal must match between the two channels in order to take effect. The primary reason for this is to handle the case where an error on one channel destroys the code. In such a case, the decoder will mistrack for a short time until the next command comes along, which is much less audible than a change in gain on only one channel, causing a shift in balance and lateral image movement. If either of the code detect timers times out, then code is deemed not to be present, and all commands are canceled, returning the decode system to its default state. If the conditions on the encoder side are not changing, then command packets are inserted on a regular basis to keep the code detect timers in the decoder active and to update the decoder if one starts playing a selection in the middle of a continuous recording.

— "extract from the AES paper presented by Keith Johnson" [2] paper:[3]

Regarding the Low-level Gain Adjustment feature

If you see a level of greater than 4.0 of gain adjustment, there was an error made in the disc where the mastering engineer mistakenly used "Special Mode". This is not only wrong, but there is no consumer equipment that can even decode this level of gain adjustment! Only by playing this back through the PM Model One (44 and 48 kHz only) or the PM Model Two (added dual- and quad-rate sampling rates) could this file be properly decoded

Regarding the Playback Filters feature

[T]he PM Model One and Model Two professional units, which were combination A/D and D/A converters) that had two different playback (reconstruction) filters for HDCD. While the PM A/D used two different anti-aliasing filters while performing A/D conversion (depending on the level of high-frequency content), they were precluded from using two different playback filters as Ed Meitner had already patented that idea for Museatex (now out of business).