foo_title is a component, which displays the currently playing song on the top of the screen (something like Winamp's WindowShade Mode).

It supports custom-made skins and is written in C# (with some C++/CLI for binding to foobar). 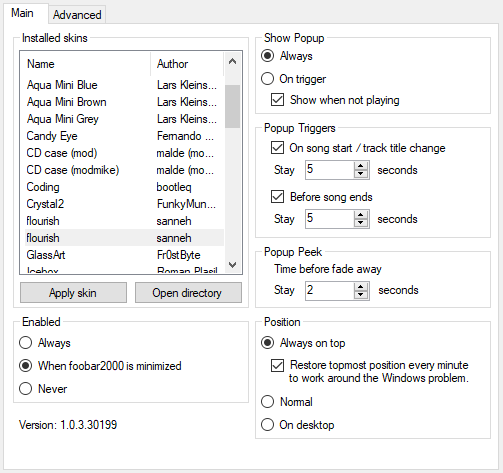 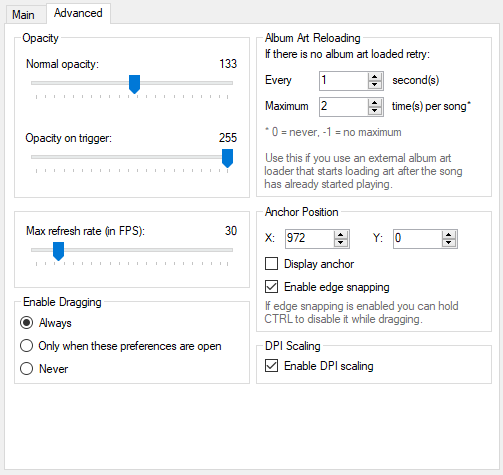 foo_title contains the following functions that can be mapped to keyboard shortcuts (Preferences > Keyboard Shortcuts > Action):

foo_title UI is defined by the selected skin.

Skin consists of main skin.xml file, that contains skin's description, and various resources that are used by skin.xml. All these are placed inside skin's directory: [foobar2000 installation folder]/foo_title/[skin folder]/.

Skin supports all the image formats that are supported by the .NET framework itself - that is bmp, jpg, png (for transparent images) and perhaps more.

You must start your skin with a header like this one:

The size of the skin can be overstepped as the size is adjusted automatically.

Anchor is used to pin specific point of skin to display. When skin size changes, anchor stays on the same place (relatively to display), meaning that the skin will expand or contract only in non-anchored directions. The position of the anchor can be displayed via Preferences > Display > foo_title > Advanced > Anchor Position > Display anchor.

A layer is an element, a kind of container. Layers can be nested or placed consecutively.

The global structure of layers is as following:

Tooltip will be displayed only when text in tooltip property is not empty and the containing layer is topmost (with the exception of no-content layer). Tooltip text can also contain foobar2000 queries.

If clip property is set to true (which is the default value), then all the nested layers will be clipped by the parent layer's boundaries when drawn.

If persistent property is set to true, then the enabled state of the layer will be saved upon fb2k exit and will be restored on the next launch.

size, position and padding properties of geometry can contain foobar2000 queries. Everything that works in foobar2000 will work here as well, see titleformat help for further reference. Be advised, that using queries in geometry might degrade your performance if overused, since it parses those queries every time frame update is called (see Preferences).

The layer occupies as much space as possible - the whole client area of the parent layer.

full type requires a padding element with the following attributes: left, top, right, bottom. These attributes adjust the position of the client area of the layer within the parent layer. For example:

The layer has fixed absolute size and position relative to it's parent layer, i.e. resizing the window won't change the placement or the size of the "absolute" element.

The x and y attributes adjust the position of the layer relative to it's alignment. For example:

This layer occupies only as much space as it is required by nested layers it contains and it's padding. Thus, for example, it's possible to wrap text layers with other layers, without specifying it's absolute size or filling the whole parent layer.

The contents part will indicate the kind of things contained in the layer and you will be able to specify information related to the contents type.

This layer does not contain contents sub-element. It's sole purpose is positioning of other layers. It is also transparent for tool-tip layer detection, meaning that it won't disable tool-tip for layers underneath.

If repeat attribute is set to "true", then the picture will be repeated, otherwise it will be stretched.

Displays images stretched to full size of the layer, one over another. This layer also supports animated .gif images.

Cycles images repeatedly. Could be used instead of animated .gif images. Images are stretched to full size of the layer. Cycle frequency is equal to 15 frames per second by default and can be adjusted via speed property.

This layer displays the album art. There is one sub-element, NoAlbumArt which defines the image to show when there is no art to display.

Fills the whole layer with the specified color.

It is the only content type that can resize the skin dynamically. It does so according to the text width. Layer's geometry must be set to full or minimal for resizing to work.

spacing is the space between the left and right labels.

By default angle attribute is set to zero. It can have an arbitrary value, but sizing works properly only for multiples of 90.

The color defines the color in a similar way to HTML colors. The first 2 numbers is alpha.

The values written in the contents node are taken as default and can be overridden in the labels.

This layer is almost the same as normal text layer, except for the following:

This layer creates a clickable button. It's sub-element action defines the action to execute. The action supports multiple types of actions, selected using the attribute type.

The sub-elements normalImg, overImg, downImg select which images to use for the button in the three states.

There can be more than one action element. They are all executed in the order they appear in the xml file.

You don't have to specify normalImg, overImg, downImg in which case nothing will be drawn. It's forbidden to assign to both button and scroll attributes values different from "none" simultaneously.

Launches a mainmenu command without specifying it's full path.

For example instead of Playback/Volume/Set to -3 dB:

Launches a main menu command. The entire path to the menu item must be entered, using / (slash) as a separator. For example the following will set the playback order to random:

Runs a context menu command. The target of this command is given by the attribute context.

Contextmenu items are rather tricky, because they can be re-ordered by user and components can create the menu dynamically. foo_title always uses the default path to the item. You can find the default path in contextmenu editor when you right-click on the root node and choose Add item. Dynamic items unfortunately don't show up the same way in the menu as the path. Here are some correct examples of valid context menu paths:

For example the following will show properties of the track that is currently being played:

Toggles a layer (including its sublayers) on or off. Disabled layer is not drawn, updated and does not react to input. The attribute target contains the name of the affected layer.

To enable/disable more layers at once, simply include multiple action tags in the button.

See skins supplied with component and links below.