Warning: This component is known to be problematic, due to repeated crash reports, and should be installed with caution. 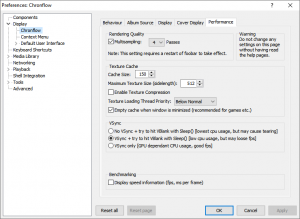 Note that the Sleep() modes need to know your display's refresh rate. If you have a multi-monitor system with different refresh rates among the monitors and foobar not running on the primary display, the plugin might not be able to guess the right refresh rate.
If your refresh rate is 100hz, the plugin limits itself to 50fps, since you can't see 100fps after all.