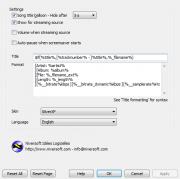 Foobar2000 Advanced Controls is a component allowing you to control all the playback functions from icons in the Taskbar notification area.

In a very small space (2 icons), you have all the standard playback functions (Play / Pause, Stop / Load, Previous, Next) and a seek or volume bar. Right-clicking the icons brings up a context menu with all these functions, direct access to preferences, as well as a Delete current track feature which sends the current playing file to the recycle bin if possible, then skips to the next track of the playlist.

The component also provides a pop-up balloon when a new song starts, displaying relevant meta-data information from the music file. The format of the pop-up balloon and the time after which it is hidden are fully configurable.

The component also provide an option to automatically pause the music when the computer's screen saver starts.

Thanks to the help of several contributors, the component is available in 20 languages (as of September 2010), all built in the same library. The language can be selected from the installer, or in the preferences dialog. The component text can thus be displayed in English, French, German, Spanish, Italian, Simplified Chinese, Russian, Czech, Danish, Estonian, Greek, Macedonian, Hungarian, Dutch, Polish, Brazilian Portuguese, Romanian, Slovak, Swedish and Turkish.

Foobar2000 Advanced Controls is tested on Windows XP, Windows Vista and Windows 7. The component behavior is slightly different on Windows 7 due major changes in the Windows Taskbar interaction possibilities, such as the drag & drop reordering of notification icons.