Difference between revisions of "EAC and WavPack"

Note: This guide assumes that EAC is has been configured for secure ripping, if not please follow this guide.

-> If you are using EAC 1.0 beta 2 or newer, then in the Additional command line options box, copy and paste the following string:

-> If you are using EAC 1.0 beta 1 or earlier, then in the Additional command line options box, copy and paste the following string:

Note: If a user wanted to change compression settings on WavPack the green portion what you would substitute with the new preset. -> Manual (WavPack Options) 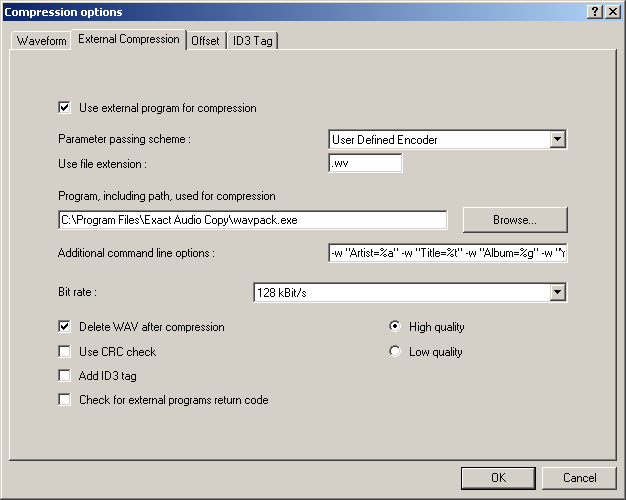 Since WavPack 4.1 beta you can specify an additional file path when using the -c switch to request a correction file. This filepath will be used to name the correction file.

The suggested method to implement this feature is to utilise the Use CRC check checkbox on the External Compression dialogue, to specify whether a correction file is required or not. In conjunction, you must also add the following to the end of your command line:

Note: If a user wanted to change compression and bitrate settings on WavPack the green portion what you would substitute with the new preset. -> Manual (WavPack Options)

If you do not want this configurability, simply add:

All encodes will then include a correction file, which is named correctly.

If you prefer to rip to an image file, and want to embed the cuesheet in the image, you can add the following tagging switch to your command line:

This uses two of WavPack's features. Firstly, the '@' tells WavPack to set the 'Cuesheet' tag from the contents of a file. Secondly, the wildcard '*' tells WavPack to find the file itself, given the '.cue' restriction (i.e. "find the first '.cue' file you come across").

PLEASE NOTE: This will only work if there is one CUE file in the folder. WavPack will exit because of this command, if you have an existing cuesheet in the folder before starting. The easiest way is simply to ensure that you either move your previous rips beforehand, or rip to a new directory each time.